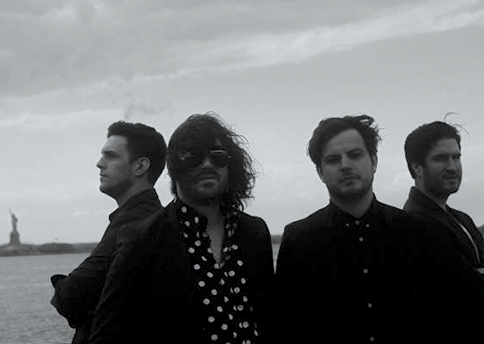 Elliot & The Ghost came together in 2013 in New York City. Having recently departed from Austin’s teen outfit The Steps, singer William Thompson met drummer Daniel Edwards, guitarist Brett Giroux, and bassist Connor Jones. The band’s very first performances were held in old Brooklyn loft spaces and scuzzy dives. Within a year’s time the group was invited as direct support alongside Weezer, and has since shared stages with B.B. King, The Chain Gang of 1974, amongst many others.
The band released their debut EP Is this Love in early 2014. The 5-song set was recorded in the bowels of Brooklyn in a cramped basement apartment. Their limited budget required the band to get creative, mic’ing a staircase to capture percussion, and convincing two clowns from the passing Ringling Brothers circus to contribute trumpet and trombone, all the while having to stop every 5 minutes to allow the rumbling trains to pass by. Artist Direct praised Is This Love as “a vibrant painting with sonic colors spanning Nick Cave-style cinematic musings, surfed-up post-punk guitars evocative of The Smiths and The Clash, and eerily danceable beats, the songs prove instantly magnetic. Still, descriptions don’t do it justice. You’ve just got to let Elliot & The Ghost haunt you.” Flavorpill lauded their “brand of Southern influenced pop-rock,” and Gimme Shutter declared the disk as “mesmerizing.” Similarly, CMJ applauded their “fresh, airy kind of surf-pop in the vein of early Rosebuds or the Shins stripped of cardigans and sent back to a dank basement to get a little tipsy and start all over.”

The band completed a three month long tour in support of Is This Love in the Summer and Fall of 2014, and are now back with a series of new singles and accompanying music videos to be released periodically throughout the year.