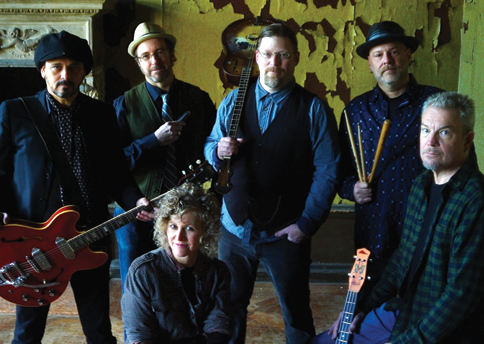 Seeing a Spuyten Duyvil (pronounced “SPITE-en DIE+vul”) show for the first time is like “throwing a cherry bomb into a lake” (Rich Warren, WFMT). It wakes you up. Their brand of original and traditional American Roots music blends Olde Time, Blues, 2nd Line, Bluegrass, and Folk Rock with a pinch of Punk Rock energy to create a uniquely modern mix. Lead by song-writing couple, Mark Miller and Beth Kaufman, this six piece powerhouse brings barn burning energy to venues throughout the East Coast and Midwest.

“This is as close to a musical “Come to Jesus” moment as you’ll get outside the gospel roots of the deep south. Yonkers, NY based Spuyten Duyvil are the real deal when it comes to roots revivalist Americana music. Historians, outstanding songwriters, accomplished musicians and a musical family atmosphere converge to make some of the most outstanding music around today.” -William Hurley, The Alternate Root TV

It’s an exciting time for the Hudson Valley based band. They have just released their third full length CD, “The Social Music Hour Vol 1”. A love letter to the Anthology of American Folk Music, the project features lyrically relevant, known but not worn out, open for suggestion songs that thrives with re-interpretation. Familiar, forgotten words find new meaning in this historically informed but thoroughly contemporary treatment. Old wood, plaster, real spaces, vintage guitars and hot tubes are captured in warm, analog tones by studio designer and engineer Jim Keller (Willie Nelson, Nellie McKay). Recorded by the full band (no click, no net), the tracks burst with life, joy and vitality.

“Those masters of high-octane Americana, Spuyten Duyvil, have achieved a breakthrough on their new CD, “The Social Music Hour Vol, 1.” – John Platt, WFUV

“Infused in blues and smoked with folk…. This album is an Americana treasure chest.” – Easy Ed, No Depression

“Totally irresistible! … This one will get a LOT of airplay on KPR.” Bob McWilliams, Kansas Public Radio

Since it’s release in March 2015, “The Social Music Hour Vol. 1” has received a lot of love on the radio with airplay on over 250 stations worldwide including rotation on SiriusXM’s The Village.