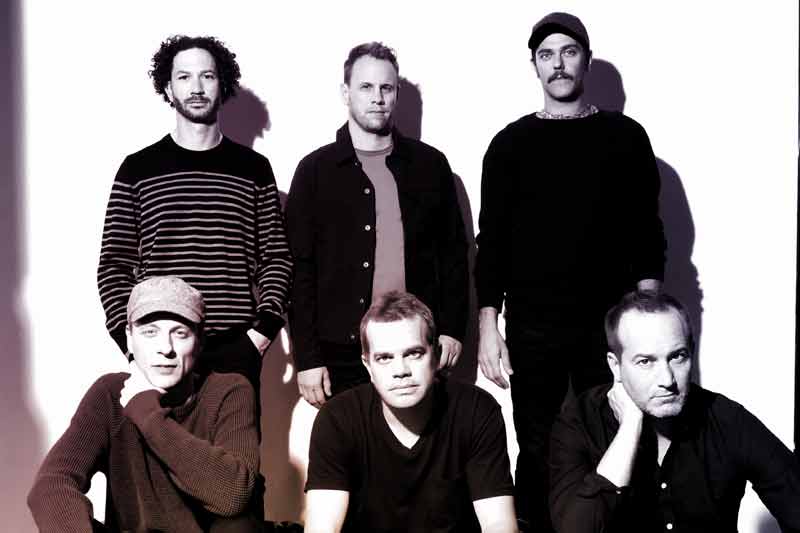 The music of Umphrey’s McGee unfolds like an unpredictable conversation between longtime friends. Its six participants—Brendan Bayliss [guitar, vocals], Jake Cinninger [guitar, vocals], Joel Cummins [keyboards, piano, vocals], Andy Farag [percussion], Kris Myers [drums, vocals], and Ryan Stasik [bass]—know just how to communicate with each other on stage and in the studio. A call of progressive guitar wizardry might elicit a response of soft acoustic balladry, or a funk groove could be answered by explosive percussion. At any moment, heavy guitars can give way to heavier blues as the boys uncover the elusive nexus between jaw-dropping instrumental virtuosity and airtight songcraft.

The conversation continues on their eleventh full-length album, it’s not us [Nothing Too Fancy Music]—out January 12, 2018.

“It represents the band, because it basically runs the gamut from prog rock to dance,” says Brendan. “We’ve mastered our ADD here. The record really shows that.”

“No matter what you’re into, there’s something on it’s not us that should speak to you,” agrees Joel. “This is a statement album for Umphrey’s McGee. The sound is as fresh as ever. The songs are strong as they’ve ever been. We’re always pushing forward.”

It is also how the band is celebrating its 20-year anniversary. Instead of retreading the catalog, they turn up with a pile of new tunes.

“It’d be easy to play the hits from our first five or ten years,” continues Joel. “We’ve never been a band to rest on our laurels though. New music is key to our continued development. We’re known as a strong live band, but we take so much pride in our writing. This album distinguishes us because the focus is on that writing.”

Appropriately, this idea gestated on a sunny May afternoon at Wrigley Field. Six months before The Cubs won their first World Series since 1908, Brendan took in a game on a rare day off.

“I can pinpoint the actual a-ha moment,” Brendan goes on. “My wife was out. My kids were at daycare. I walked to Wrigley, bought a standing room ticket, and enjoyed the game. Halfway through it, I thought to myself, ‘If we can get into the studio by the end of the year, we can have a brand new record.’ That’s where it all started.”

Bringing things full circle, Umphrey’s McGee entered I.V. Labs Studio in Chicago ready (and maybe a little hungover) a week after that historic game seven. For the first time since recording Local Band Does O.K. in 2002, five of the six members roomed together in a rental condo with Brendan staying a stone’s throw away at home.

“We would wake up, bounce ideas off each other, and go to the studio together,” recalls Joel. “We did all of this as a unit. There was something really special about our group ethos coming together for this project. We decided to go in for a week, live, eat, and breathe Umphrey’s McGee. It’s the most fun we’ve had in the studio. It really was a blast. Having that camaraderie was really cool.”

That camaraderie shines through in their inimitable interplay, which finds them at the pinnacle of their craft and groove as a band. That chemistry defines the approach—which sees Umphrey’s McGee hone their songwriting to its sharpest point to date.

“I feel like we’re getting better and better at writing succinct, concise musical pieces,” Brendan elaborates. “When we started out, we were trying to figure out how to fill time. We didn’t have much of a catalog, so we had to extend things and repeat parts in order to make up space. Since our catalog is so big now, we don’t feel the need to make everything ten minutes long. We’ve really trimmed the fat. Everything seems to be the right length.”
It is definitely the case with the first single “The Silent Type.” Powered by a bombastic beat, funkified rhythms, fiery fretwork, and a chantable refrain, this anthem introduces it’s not us with a bright and brilliant bang.

“It’s super simple,” explains Brendan. “This character is in the wrong place at the wrong time making the wrong decisions. Everybody has to deal with temptation. That’s a part of life. This guy goes out, and he blows it after a girl offers him a cigarette. You see it all the time.”
“Half Delayed” builds from airy guitar into an iridescent refrain that serves as “a reminder to stop and smell the roses.” Meanwhile, the bass strut, anthemic beat production, and percussive wallop of “Looks” could be the love child of Nine Inch Nails and Talking Heads. Then, the metallic shredfest outro of “Remind Me” bleeds effortlessly into the gorgeous acoustic love song “You & You Alone.”
“We called the record it’s not us, because it’s really not about us,” adds Joel. “This is for the fans.”

Over 2,200 gigs and 5 million tracks sold later, they’ve enjoyed countless milestones. 2002 saw them perform at the first-ever Bonnaroo and sell more CDs than any other act on the bill. They became the “first group to launch its own single artist streaming service” with UMLive.net, which houses recordings of every gig since 2005. The service has since grown and now lives on through Nugs.net, which is used by the likes of Pearl Jam, Bruce Springsteen and more. They recorded ten tracks in one day at Abbey Road for The London Session in 2015. Notably, 2016’s ZONKEY mashed-up the strangest of bedfellows into a critically acclaimed collection that unites Radiohead and Beck, The Weeknd and Fleetwood Mac, Talking Heads and Bob Marley, Metallica and Gorillaz, and more.

That adventurousness extends to their legendary audience immersion experiences. From their initial bar gigs in 1998 to three-nights playing to packed crowds at the legendary Red Rocks Amphitheatre in 2017, the group have simultaneously remained intensely committed to their fans. Beyond intimate backstage encounters and ski trips with their most diehard fans, Umphrey’s McGee instituted the groundbreaking “Headphones & Snowcones” program, granting fans access to professional headphones and a soundboard-quality mix at shows. At their UMBowl, they empowered the audience to vote on the setlist in real-time and choose favorite improv themes via text message. In 2017, they stepped into another realm altogether by integrating themselves into the VR Platform Endless Riff.

With the album on the horizon, a headline tour and a three-night Beacon Theatre residency in NYC plotted to celebrate the anniversary in January, it’s not us kicks off a new era for Umphrey’s McGee and their ever-growing audience.

“There’s something uniquely Umphrey’s McGee that could never be mistaken for another band,” Joel concludes. “I hope it makes people think a little bit or shed a te

ar or two. Maybe, you smile or laugh. Life is hard. We still believe music can heal and motivate.”“We’re here,” Brendan leaves off. “We’re not going anywhere. We’re starting to find our identity. I think if you give it a chance, you’ll be pleasantly surprised.”

WHAT THE PRESS IS SAYING

“ . . . genre distinction was never big enough for what Umphrey’s McGee actually do, which is closer to pop-smart and dance-wise progressive rock, laced with exuberant improvisation and flush with intense, melodic craft.” – David Fricke, Rolling Stone

“Expanding the notion of what a rock band can offer” – Time.com

“occupying a musical space where few dare to tread” – PopMatters.com

“The new Umphrey’s McGee album kills (literally) . . . Without a doubt one of the most inventive and mercurial bands of the last decade.” – CBS Street Date

UMBowl – “Fans attending UMBowl, the annual concert put on by Chicago band Umphrey’s McGee, will be able to steer the show by texting song requests in real time and suggesting themes for musical improvisation.” – WIRED

“…a close, immediate way into the kind of details that can make my night: the union of David Gilmour’s stiletto-treble poise and Eddie Van Halen’s torrential shredding in Cinninger’s exuberant, extended breaks; the empathic precision with which the band turns in the segues.” – Rolling Stone

“With 15 years of continuous touring, an exceptional lighting director..and a loyal Midwest fanbase…Umphrey’s McGee has solidified themselves as a top tier act that closed out a commemorative year in style.” – The Denver Post

“Impeccable chops, jigsaw-puzzle tunes, sexy-time dance grooves, X-factor surprises, classic-rawk grandeur, and a refreshing sense of humor make this Midwest-spawned sextet among the four or five most fascinating bands in the country right now….Catch them while they’re still cult.” – The Village Voice